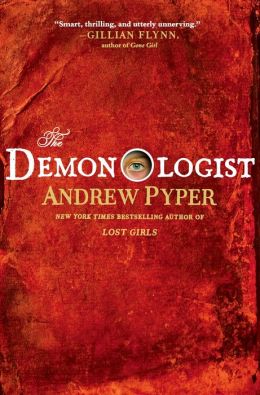 Andrew Pyper's latest book caught my eye originally as I was browsing through a stack of ARCs because the criminal suspense is centered around Milton's "Paradise Lost." Literary geek that I am, I had to pick it up and see what it had to offer.
The protagonist, Professor David Ullman, is a scholar of religious texts, particularly of Milton, although he is not a religious man himself. Trapped in a black hole of a marriage with his daughter Tess the only bright point in his life, Ullman is suddenly approached by a mysterious woman representing a benefactor who wants to fly him to Venice. Why? To witness and weigh in on an undisclosed phenomenon relating to his work as a "demonologist," as the representative puts it. After initially saying no, Ullman takes Tess with him on what he thinks will be a relaxing, all-expenses-paid consulting trip to Italy. Alas, there would be no story if this were the case.  When he finds his way to the mysterious house in which he is to witness the phenomenon, Ullman finds himself face-to-face with a demon who wants him to be a witness to its presence. This meeting heralds the beginning of a desperate search for Tess, taken by the unnamed demon, all across the United States with a hired assassin pursuing him and a cancer-ridden best friend as his only copilot.
While it was an overall okay suspense novel with an interesting premise, I expected a little bit more of Milton than was presented. "Paradise Lost" was used to identify the demon and his purpose in choosing Ullman, his motivations and his weakness. Ullman also used it to find clues about where to go in search of Tess, but these quotes and clips were taken completely out of context of the original work, some of them requiring such great leaps of thinking (see the one about Florida) that they were almost pointless. Pyper might have more easily just said "Hey, let's have them randomly decide to go visit Jacksonville." The purpose of this interstate trip, when revealed at the end, doesn't excuse the sheer obscurity, almost randomness, of the journey itself.

The reader and Ullman are both told that Tess will be lost forever if he cannot save her within a certain time limit, but never once did the protagonist express any sort of clue as to how he was supposed to get her back. I imagine that this would be the more realistic representation of a father whose child has been taken: desperately following cobweb-thin clues, running around half-lost and confused. This is probably a more realistic representation than the persona of the Bold Hero who knows exactly what he's doing, but it somehow seemed to detract a sense of urgency from the writing.

SPOILER ALERT: After all that work, all that self-discovery and desperation, not to mention what gas must have cost him, Tess is magically returned to Ullman and everything is fine? He just gets on a train at the instruction of his dead friend, who is an angel, and Tess is there waiting for him. This ending screams "Just believe in God and everything will instantly be okay!" It's like the Book of Job rewritten for the modern era, only instead of getting new children Ullman has his used model back again.

If you like supernatural crime novels with no romance (sorry, "Twilight" and "Fallen" fans) give "The Demonologist" a try. Andrew Pyper's latest will be at your favorite independently owned bookstore in March of this year. Also expect to see a book-based movie by Universal Studios.
Posted by Jenny Blenk at 9:38 AM