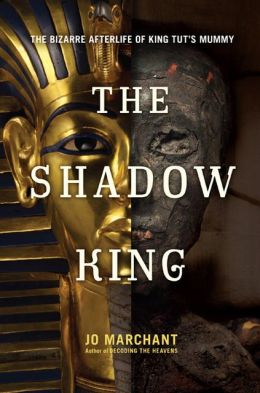 Nonfiction, you ask? Isn't this supposed to be a SpecFic blog?

You're right, my literary tastes normally tend toward the fantastical. But I've made an exception for Marchant's latest book for several reasons: First of all is the subject matter. Ever since the tombs of ancient Egyptians started being excavated over a century ago, the mysteries that were hidden therein have prompted both professional and amateur Egyptologists everywhere to wonder about the people who built and inhabited those ruins. Speculation in its purest form! Secondly, the book sets a spotlight on the hypotheses of the researchers, archaeologists, and other specialists who studied King Tut and his fellow royal mummies. But Marchant goes even further, to reveal which speculations were proven true, how theories morphed and evolved with scientific capabilities, and what we still don't know today where the famous Egyptian mummies are concerned. King Tut and the rest of the royal mummies uncovered in and around the Valley of the Kings are a SpecFic enthusiast's dreams come to life: mighty ancient civilizations full of power and intrigue, a pantheon of fascinating gods, unbelievable treasures, and the remnants of royal leaders so well-preserved that they have lasted three thousand years for us to wonder at today. The best part? This dream is true, and depicted in extreme detail in Marchant's book.

Marchant, already a renowned journalist specializing in history and science, starts this book with the initial discovery of the valuables hidden with Egypt's mummified dead, and the treasure hunt that ensued. From that beginning, she traces the development of discovering not just the tombs themselves but the mummies therein, and the questions that their presence prompted: Who were they? How had they been preserved? What secrets could they reveal to us about their once-mighty civilization? From initial tomb openings and autopsies in the 1920s to modern-day DNA testing, museum displays and cable tv specials, Marchant follows not just King Tut but the other royal mummies as well, and the people who studied them.

And like any good investigative reporter, she doesn't pull any punches. Marchant reveals the unscientific, often brutal ways in which mummies - even King Tut - were treated by early Egyptologists (in fact, she points out how some of the ways in which mummies were treated led to later misdiagnoses by more modern Egyptologists, due to the conditions in which the bodies were left). She faithfully follows these tests, hypotheses, and discoveries straight into the modern age, where conflicts over the viability of ancient DNA create controversy in trying to reconstruct King Tut's family tree. Additionally, Marchant is sure to include details of public reactions to the mummies and the study of them: political implications, "Tut-mania" in the mainstream market, museum exhibits and even a fringe group that believed King Tut was really either Moses or the Pharaoh featured in Exodus.

Don't mistake this book's classification as "nonfiction" for "dry" or "boring." Marchant's voice is very personable, and infinitely readable. It feels like she's talking to you through the pages, explaining complex science in layman's terms without making the reader feel dumb. As easygoing as her voice is though, her sources are all meticulously cited both in footnotes and in a bibliography at the end of the book. By the time I finished The Shadow King, I wondered if maybe Marchant didn't know more about King Tut than some of the specialists who worked on him. Photographs, some from the original excavations and autopsies, provide extra depth on the subject of the royal mummies and are a real treat as well as giving some additional perspective on Egyptology.

I highly recommend this book to anyone with an interest in ancient Egypt, modern-day science, modern archaeology and anthropology, DNA technology, or just the fact that an empire like that of King Tut even existed. It's truly a treat to read, even if nonfiction isn't really "your thing." Trust me. Whoever you are, there's something interesting for you in this book, even if it's just a new story idea of your own.

Jo Marchant's first book, Decoding the Heavens (in case you're interested in the Antikythera mechanism), is in stores now. The Shadow King will be available at your local independent bookstore starting on June 4th.
Posted by Jenny Blenk at 9:23 PM