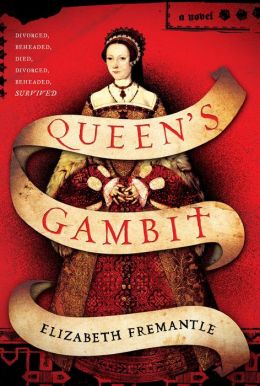 King Henry VIII is probably best remembered for his string of six unfortunate wives and for the rift he created between the Crown and the Catholic church with his reformation attempts. This book by Elizabeth Fremantle addresses both defining issues, primarily from the perspective of Katherine Parr, King Henry's sixth and final wife. After the death of her second husband Katherine is summoned to court to serve one of the king's "illegitimate" daughters. She never imagines, over thirty years old, that she will be the one to catch the king's eye and be chosen as his next wife. But with the aging king progressively more unpredictable and prone to bouts of rage and senility, Katherine's life hangs by a thread as the tides of court intrigue swirl around her.

But Katherine doesn't want to be just another docile woman under the thumb of her monarch husband. She is a fervent religious reformer, reading banned books and writing some of her own religious thoughts, and treads a fine line between playing the good wife and trying to convince Henry to promote more reform. But such progressive thinking earns Katherine some powerful enemies within the king's inner circle, and they will use whatever sway they have to try and oust her from King Henry's good graces. And Katherine's enduring and forbidden love for the courtier Thomas Seymour may provide them with the ammunition they need to seal her fate.

Fremantle uses real historical figures from the court of King Henry VIII to tell the story of a strong, smart, determined woman trying to blaze a trail of reformation in a world where women had no power. Katherine's perspective in the story is complemented by the perspective of Dorothy Fownten, one of the queen's servants. This creates an interesting "Upstairs/Downstairs" feel to the whole novel. It also serves to deepen Katherine's eventual legacy beyond her title and her heir, to imagine the impact she had on the people immediately around her, servants and peers alike.

While many of the details of personal relationships during this time period are lost down the well of history, Fremantle creates a very believable web of friendships and rivals, with many of them intertwining and overlapping. While the author openly admits that she has taken the liberty of fabricating many of the relationships as she imagines they would have been, I found the friendship between Katherine and Huick, a court physician, to be particularly endearing. Their kinship is a silver thread woven throughout the novel's entirety, the bright spot in some of the darkest situations.

**SPOILER ALERT** I found it frustrating, however, that the strong convictions about religious reform and education that Katherine had at the beginning of the book disappear as the novel continues. I understand that she must have been feeling worn down and threatened at every turn, but to have her turn into a weak woman waiting for her own demise, whose only wish in the world turns out to be having a baby, was a disappointment. I find fault here not with the facts, but in the presentation of Katherine's personality change. It is so complete that by the end of the book there is not a trace of the adventurous protagonist who caught my attention in the beginning. Instead, she just wants to be a wife and mother. I'm not saying that these are not admirable goals for a woman in any time period; they are just a far cry from her initial character presentation, especially in that she had no additional aspirations.

Anyone who appreciates detailed and engaging historical court intrigue, where some of the most subtle plays have the most profound consequences, will be blown away by Queen's Gambit. The sincere personal relationships that form even in the midst of King Henry's violent court make for a very compelling read. Queen's Gambit was released on June 18th and is available at your favorite independently owned bookstore now.