Book Review: "The Cure For Dreaming" by Cat Winters 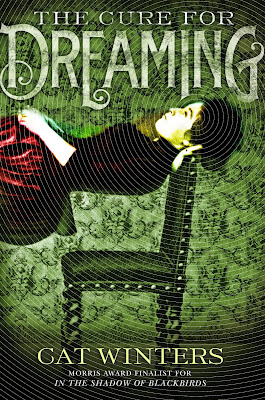 Hypnosis has played a wide variety of rolls in fiction over the years, from healing process to horrific mind control vehicle. Olivia Mead finds out just how potent hypnosis can be when she falls under the influence of Henri Reverie, a hypnotist passing through town. It's 1900 in Portland, Oregon, which means that the fight for women's suffrage was in full swing. Olivia finds herself drawn to the cause, dreaming of someday attending college and living outside the influence of any man, be it her controlling father or a husband he deems suitable for her.

Tiring of Olivia's headstrong pursuit of education and independence, her father Dr. Mead hires the young Henri Reverie to remove Olivia's dreams and aspirations. But little does Dr. Mead know that his attempt to control even his daughter's thoughts will lead to even more elaborate plans on Olivia's part to not only escape him, but further the cause of suffrage and even help Henri, who is controlled by his own unfortunate circumstances.

This story was a young woman's personal journey as much as it was eventually a story of escape and independence, not just for Olivia but for Henri as well. I picked it up because the aspect of hypnosis looked interesting, both in its application and its function. What the blurb did not hint at was just how much of a part the suffrage movement would have in the plot. They went together well, the idea of control and, in this situation, the fact that trying to hold something (or someone) down can be precisely what causes them to rise up in revolt, rather than the reverse. Middle readers interested in Pacific Northwest political history or the suffrage movement specifically will learn a lot about how the different factions operated (although there's not much subtlety involved; "liberated" women appear to be glowing with potential and an inner light of strength, while anti-suffrage women appear as vampires and downtrodden women are ghosts to Olivia's hypnotized mind) while being entertained by the unfolding story.

If you're looking for something for a young reader interested in women's rights or a good story of escape with just the barest hint of romance and plenty of positive press for education and equality, you should add The Cure for Dreaming" by Cat Winters to your reading list. It will be released on the 14th of this month and you can pre-order it right now at your favorite local, independent bookstore.