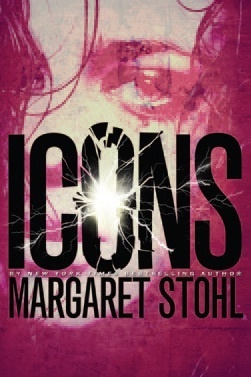 Kicking off her solo writing career after her success with Beautiful Creatures and its associated books, Margaret Stohl brings us Icons, the first in a new series.

Doloria de la Cruz has been raised in a small mission in the wilds of California. There is no electricity, no power of any kind. Not since The Day, when extraterrestrial invaders sent projectiles into the 13 largest cities on Earth, which produced electrical pulses that killed everyone around them instantly. Doloria survived, and she's about to find out why. On her 17th birthday, her mission home is attacked by Sympa troops and she is taken to the Embassy for reasons unknown to her. However it soon becomes clear that she, and three other teenagers, have something very special about them. Surrounded by Sympa soldiers, a sadistic "teacher," and with the constant threat of alien ships above them, Doloria and her companions uncover truths about themselves and their alien masters with the help of the Grass Rebellion leader, a kooky computer, and their own mysterious powers.

Stohl presents here an interesting take on the idea of alien invasion: faceless extraterrestrial overlords who allow human leaders to remain in power and govern their own cities within certain guidelines. By doing this, she primes her new books for intense political energy and surprise twists in alliances in the volumes to come. Additionally, the idea of using electricity to control humans is well thought out. Aliens allow and control power within the cities where humans can be monitored and put to work, but outside, any presence of electricity can be identified and its creators captured. Additionally, electricity can be used to control the human body itself, surging to cause heart attacks like what happened on The Day and forming a barrier to keep humans away from the objects that were dropped on the cities then.

While these ideas have a lot of potential, I feel that they failed to balance out what was lacking in other parts of Stohl's novel. The general idea is that the "Icon Children"'s extreme emotions are what allow their powers to manifest, but the reasons why emotion is powerful against the alien force is mentioned only once that I can remember in the entire text, and that in passing. Additionally, for having characters who channel such intense emotion, the book doesn't convey much in the way of feelings. It's a classic case of "telling" instead of "showing" the reader what's being felt, leaving me with the idea that Doloria experiences a certain emotion rather than making me feel that emotion myself.

Additionally, I feel like the middle part of the book was extremely static and just a little confusing. The companions are in the Embassy, but we don't really know what they're doing there. The interim offers the opportunity for them to find out valuable hidden information, and allows them to build up some relationships together, but it's not really clear if they're students, prisoners, soldiers, or what. Allusions are made to classes, but they seem to move about on their own schedule, but are accompanied by guards and occasionally undergo experiments. This period of stalled activity then explodes into the novel's conclusion, which seemed to me like it happened much too fast. Lots of intense, dangerous, amazing moments are taking place in the space of just a few paragraphs, when I feel like there should have been pages devoted to the characters' reactions, thoughts and feelings. A big opportunity was missed there by compressing an event that could have really drawn readers in instead of being glossed over and moving on to the end.

Icons is a good story concept, but the execution fell far short of what it had the potential to be. If you're willing to overlook sub-par storytelling in the event of an innovative story, then by all means, I recommend this latest from Margaret Stohl. It is my hope that the next book in the series will be able to shore up some of the weaknesses in this first installment. Look for Icons at your favorite local bookstore beginning in May of this year.
Posted by Jenny Blenk at 9:09 PM