Book Review: "Falcon in the Glass" by Susan Fletcher 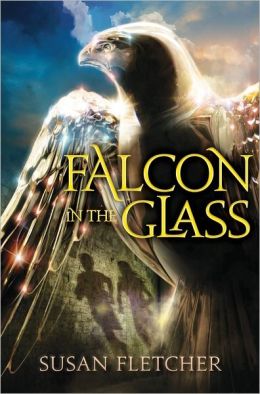 Fletcher adds to her repertoire of YA novels with this tale of a young would-be glass blower in Venice. The year is 1497, and Lorenzo is determined to overcome the dishonor of his assassinated father to become a glassblower in his own right. But nobody is willing help him learn. One night, in exchange for shelter, he buys the assistance of one of the Bird Children, social outcasts who have a strange connection with the birds that accompany them. This arrangement launches Lorenzo into a series of triumphs, revelations, and seemingly impossible situations to try and both save his family and the Bird Children who have come to rely on him.

The research that Fletcher did to accurately portray the life of a glassblower, down to the forbidden nature of leaving the small community, was really astounding and allowed her to create a very convincing depiction of the era. The settings are vivid and believable, as are the characters. Lorenzo is caught between wanting to follow his dream, needing to provide for his family, and protecting those who have come to rely on him, and his seeming helplessness in the face of the Council of Ten that governs Venice is well communicated.

While I very much liked Lorenzo's character (his growth over the course of the book is unmistakable, but not too sudden or without stimulus) I had a lot of questions about the Bird Children. Their special connection with their birds was never explained, although their back story was fleshed out a bit by the grandmother character. There was great potential for Letta to illuminate the nature of the Bird Children, but I felt let down by the fact that the only explanation from her was "we don't understand it either." I felt like a chance at some imaginative storytelling was overlooked here, and that detracted from the Bird Children as a group as well as individuals in context of the story.

Overall though, this book was a great read. It had compelling, believable conflicts, an interesting setting temporally as well as geographically, the characters were well written, and the arc was well balanced. I'd recommend this for either young teens or (even better) as a bedtime read-aloud. Trust me, you're never too old to share a book with someone you love.

Look for Falcon in the Glass, by Susan Fletcher, at your favorite independently-owned bookstore starting on July 9th.
Posted by Jenny Blenk at 7:14 PM