This YA fantasy novel has been in my "To Read" stack for a while, and I recently got around to reading it despite all the other books clamoring for my attention. And now I'm chastising myself for having waited so long to pick it up. It's a combination of historical fiction and fantasy, with just enough horror to make your toes curl in your slippers. I can see why Riggs's first novel has been getting so much positive press, and I'm about to add to it.

Average 16-year-old Jacob adores his grandfather, even as the rest of the family shies away from his strange stories and the cabinet that he keeps well-stocked with all manner of weapons. Ever since he was little Jacob has loved the tales of his grandfather's childhood on an island in Wales after fleeing the Nazis in Poland. He even showed Jacob photos of his fellow orphans, strange children with strange abilities under the strange care of one Miss Peregrine. Of course as he grows older, Jacob inevitably comes to doubt the truth of his grandfather's tales. The photos that once fascinated him become nothing more than badly altered pictures, and the "monsters" that his grandfather left the island to fight lost their literal interpretation and are assumed to be Nazis. But the night that his grandfather is killed, Jacob sees a horrible creature in the shadows and realizes that everything he'd come to rationalize away was the truth. With his dying breath, Jacob's grandfather tells him to find the bird in the loop on the other side of the old man's grave. That Jacob will be safe there.

Following these cryptic clues proves unfruitful, even with the guidance of his therapist, who believes that following up on his grandfather's dying words will allow Jacob to find closure. In a last-ditch attempt to find something, anything, Jacob convinces his parents to allow him to travel to Wales, to the island where Miss Peregrine lived with her brood of peculiar children. But when he reaches the rocky island and ventures out to what remains of the orphanage, there's not much left for Jacob to discover: a Nazi bomb hit the building the night his grandfather left, destroying it. But Jacob pokes around anyway, just to be sure he can learn nothing more. His interest earns Jacob attention from one of the girls in his grandfather's photos, who mysteriously appears there. Jacob chases her through a bog and into an ancient cairn, and when he emerges he's in 1940, on the night that the bomb hit the orphanage. There he meets the children from his grandfather's photographs, as well as Miss Peregrine, who explains to Jacob that she has protected them all in a time loop against Hollows and Wights, the creatures that killed Jacob's grandfather and the monsters that he left the island to fight all those years ago.

Now Miss Peregrine and the other children, all of whom have different superhuman abilities, are in danger and Jacob is the one who has brought them into harm's way. Luckily, he's also the one who can save them: Jacob, like his grandfather, has the ability to see Hollows. The others cannot. When Miss Peregrine is kidnapped like other peculiar matrons in other time loops, Jacob and the children must fight to get her back and find out what the Hollows are planning to do with so many powerful peculiars in their custody.

Riggs's writing style is engaging and entertaining, and I was sucked into his world from the very beginning. Jacob is a very empathetic character who struggles with some big mental challenges: mentally unstable relatives, deaths of family members, and even wondering if you're going crazy. He's confused and uncertain, even about things like which side of Miss Peregrine's time loop he'd rather be on. But instead of feeling melodramatic and overblown, the situation felt really genuine to me as a reader. I got the feeling that Jacob was just trying to stay on top of events as they occurred; he's brave and creative because he has no other choice, not because he's always known he was meant to be a hero or anything like that. This made Jacob a much more interesting character to me, and one for whom I genuinely came to care.

Another great touch in this writing was the fact that Jacob was unsuccessful in following he's grandfather's clues. He went to the old orphanage in Wales as a last desperate attempt to convince himself that there was nothing else to be found, that he was just going a little bit crazy from stress and trauma. It's only after Jacob finds himself in the loop and in the company of Miss Peregrine that he realizes what his grandfather's clues meant. That arrangement of events was really a great surprise, considering that most times there are cryptic clues given and then the story gets bogged down in solving them all before the action can commence. It was a great twist of events to have the character follow a very different trail of breadcrumbs than the one that was laid out for him (and us). I can see how some people might consider this "cheating" on Riggs's part as a writer, gearing up for a quest or mystery and then backing out. But personally, I found this take very innovative.

I've always been a fan of multimedia projects, both in my own work and in others' projects, particularly when the worlds of art and writing can intersect. Riggs takes his storytelling to the next level by adding photographs, the ones Jacob's grandfather shows him, to the book itself. It's a nice touch to see what Jacob is seeing, but what really amazed me was learning that the photos used in the book are real. They were gleaned from mountains of random old shots by dedicated collectors and enthusiasts, of which Riggs was just one. Here I've included three photos of peculiar children and one of Miss Peregrine herself: 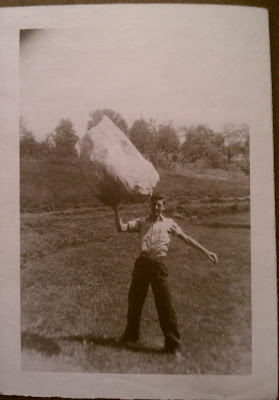 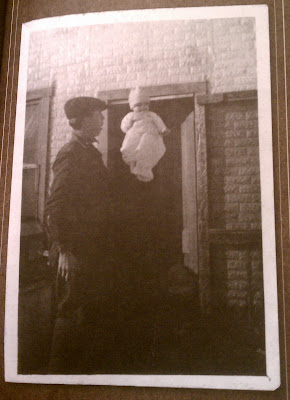 Overall this story was well thought out, innovative, and I'm genuinely interested to read the sequel when it comes out in January. In the mean time, if you like tastefully supernatural coming-of-age stories with a hefty dose of adventure and just enough horror to make you check your closet before going to bed, or (as was suggested to me by Rae from Parallel Worlds Magazine) you're a Doctor Who fan, I highly recommend picking up a copy of Miss Peregrine's Home for Peculiar Children by Ransom Riggs. It's available now in all of its glory at your local indie bookstore, and its sequel Hollow City will be available in January. Check with your friendly neighborhood bookseller to pre-order!